Welcome to the RX8Club Australian Forum

Come and introduce yourself to everyone...dont be shy

Just thought that I should introduce myself after lurking on here for a few months.

I have a black series 1 rx8 that I bought just over a year ago. The car was in pretty average state when I bought it but mostly original with full history. 1st rotary for me but i did my research coming into it so hopefully I don't get any nasty surprises. I had a pretty fun time with a modified TX5 turbo as one of my first cars which is basically a 626 /mx6 so I'm a Mazda fan.

I've had a few minor hiccups on the car which I used as excuses to modify the car. Mods to date are:

Would love to catch up and do a cruise or .meet up with other like minded people. Happy to take advice from people on the forum.

The car when I first inspected it. Still had personalized plates when I picked it up

Foggy light was hiding a heap of stress cracks through the lens. I ended up replacing the light soon after.

And after.
It looked good for a few weeks but looks carp again now.

Detailed and clay bar'ed the car. Came up pretty good

The wheels had a load of gutter rash on both sides, I was impressed that the last owner manage to do that somehow. I tried hand sanding one of the wheels and spray painting as a trial. The spray can color was good but the sparkle content was high and the paint has more orange peel than standard which now collects dirt easily. Will end up powdercoating the wheels one day. 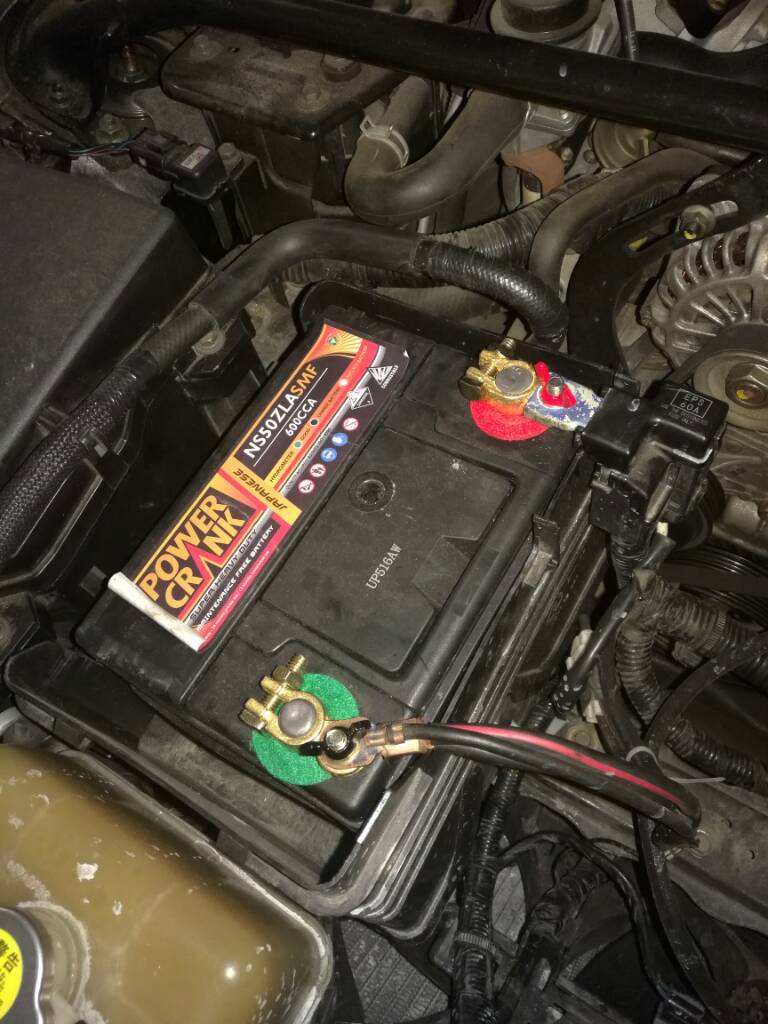 FUNNY STORY:
I decided to tint the windows on the car. After getting the car back the central locking stopped working. Turns out the dough bag tint guy smashed my door light and plastic holder, stuffed the wires in the door and pretended like nothing ever happened. The wires were shorting in the door, preventing the central locking working and the interior light wouldn't turn off. This ended up killing my battery after a long day at work, so I. had to go buy a new battery late at night from a petrol station. I was gutted that I had to buy a new battery as I was planning on fitting a LifePO4 battery which weights about 10kg less.

New standard led battery is now in and super cheap auto terminals installed. The standard terminals were terrible and were always a bit too loose.

Welcome mate. Looks like your getting into the swing of making that baby shine. If your ever after advice on detailing, paint correction or coatings just hit me up. Been doing it for about 6 years now so know a few tricks.

Where are you located?

Thanks Bob, I'm in Sunbury, VIC. I really want to clean up the car and give it a decent protective coating. The paint is okay in most places but needs some TLC on the boot and probably and respray of the front bar. The rest is not bad apart front a few chips and scratches.

What's the average thickness of the clear coat on brilliant black like?
Top

Sunbury is nice. Im up the Hume in Puckapunyal. For your year anywhere between 100 micron down to 50 micron. I strongly suggest getting the paint depth measured prior to any big correction work. Do you want a paint coating or a sealant and wax combo?

Have a look at http://www.detailcentral.com.au for the best quality coatings and waxes on the market.

Bob, I guess that I want a wax and protection coating? I checked out the link you sent, that stuff looks good. Is it better than zaino or po.' boys? I'll need to wait a bit to buy new detailing stuff, I've been buying too much lately.

Bought some genuine mazda aero style side skirts off gumtree. The passenger side has some damage so I'll need to fibreglass it and repaint before I install.

Put it this way. I havent used my Zaino in 3 years. They are hard work to get right but the equivalent Angelwax offering looks better, lasts longer and is 1000 times easier to use. This is Angelwax Ti22 under Dark Angel.

There really is nothing like it. If you want a coating that can be sorted as well.

So I bought a catch can recently off eBay and decided to get stuck into installing it. I needed one as my engine throws a but of oil into the intake. It was also a good time to clean up my intakmooe pipes and show off some of my very temporary work. I haven't cleaned up the engine bay as I'm waiting for the future engine rebuild. I'm noticing the car take longer to crank over when warm.

I tech screwed the can bracket to the battery box using the shortest screws I have. Not pretty but it works. I'll make a proper bracket later.

My Home made coil bracket was made from gal angle brackets from Bunnings, threaded rod and aluminum tubing. Future plans include make this look better too.

The air intake on the car was a knock off AEM style kit that didn't come with screens. After I installed it, the car ran badly at constant speed. The standard screens didn't fit so I made my own using fine stainless steel mesh from a leaf catching roof gutter thing I bought at bunnings. The perforations are about the same size. I taped down the edges, refitted and the car then ran much better.

Pics of aluminum radiator. I bought the car with a small leak in nipple at the top of the radiator. Past owner must have broken it and had patched it with a threaded barb. No such problem with the new radiator

So the end result isn't pretty but functional. I'm leaving the el cheapo clear hoses for now so that I can see that the can is working.

I have a very much similar catch can in my 8, but I ditched the clear hoses fairly quickly, they get very soft once they are warm. But I can confirm my set up worked as expected (plumbed pretty much identically to yours) at last nationals.. ... I filled it in no time. I actually found it easier to undo the four top screws and drain it with a large plastic syringe rather than try opening the lower drain plug with a bottle etc in place under it.
2004 Black RX8, 6 speed with Red/Black leather interior . . .not as stock as i used to be!
Optima-BHR-Walbro-TEIN+EDFC-Whiteline-RacingBeat-REVi-Speedy-RX8P Twin Oil Coolers-RX8P Sump-EBC RedStuff-RDA-GROM-Navhood+CarPC

Good idea Driffil I once had a plumbed back catch can and it was a pain to set up. Syringe is a good way to empty the can. Mine throws oil because I keep topping it up a little too much. Made me freak out the first time I drove it hard with the cold air intake on, oil dribbled out of the pod filter afterwards. I thought I had stuffed the front main seal. I've replaced the seal once and not looking forward to ever doing it again.
Last edited by Txateu on Sun Apr 09, 2017 10:55 pm, edited 1 time in total.
Top

My foglights stopped working a little while ago so I got a bit creative with the colour. Easy to change the lights but since I lowered the car, my jack no longer fits under the car. I had to create a make shift ramp out of pine.

Being a black on black car I think it looks good and is a bit of a homage to 90s JDM and initial D. Good fun.

This post is in no particular order with my past posts and was probably about 6 months ago.

Anyway, when I got the car I realised that The drivers door speaker wasn't working (or so I thought). So I searched online and found that the door amp was a common fault. I took the door amp out and went to a local computer shop with a replacement part sourced at jay car. $80 later there was no difference! The speaker didn't work. Considering you can get door amps for $50 I wasn't happy.

So I mentioned in my last post that I bought some side skirts and some minor damage. I spend some time repairing cracking in one of the skirts. It had a big crack, missing 3 tabs and deformed areas.

I started by heating up the bent areas with a heat gun and bending them back into place. I then made some plastic tabs to try and match the missing ones. I then fibreglassed it all in place. I'll check it out tomorrow to see how it's cured.

I also changed the gearbox oil today. The guides say that the box takes 1.7L. I measured closer to 1.9L drained out. I used a syringe I bought from supercheap to pump in the new oil. I put in about 1.8L and didn't spill a drop. The syringe worked a treat.

Oil was definitely old and the magnetic plug had a reasonable amount of metal and gunk on it.

Weather was bad today, I'll be testing it tomorrow.